Which are the plans for RAWGraphs 2.0? 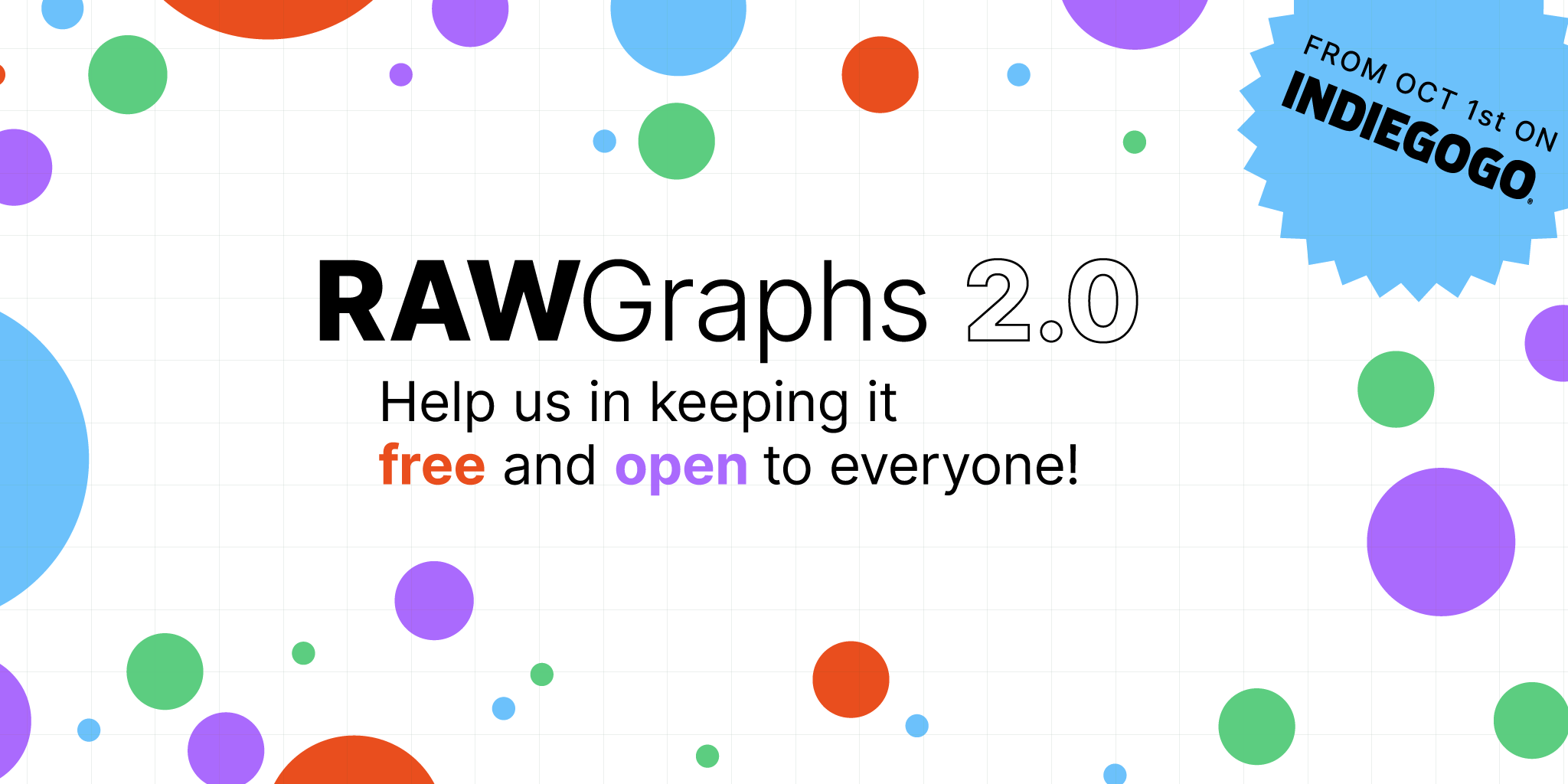 Up to now we told you that we are planning a campaign for RAWGraphs, but probably you’re wondering what we want to do, or in other words, what will change in RAWGraphs.

We have in mind two steps for the project, and the amount of things will depend obviously from the funding we will get.

Let us anticipate that we’d love to know what you think and if you find there are some missing features that you’d like to see: please provide your feedback to hello@rawgraphs.io

What happens if we reach our goal?

Our first goal for the campaign is 33,000 euro and if we reach it, first thing we will do is to thank and hug you all <3

Then we’ll have to develop a new version of RAWGraphs. With “new” we mean that all the technological stack will be updated, and the “core” of the app will be re-built from scratch. If you are interested in the technical details, we will update the GitHub page as soon as we will start the new implementation. But for all the other users, what does this mean, and why should you put your money in it?

Updating the technological stack is of fundamental importance to keep the project alive. Many of the technologies we used are now (almost) dead or deprecated, and the latest ones were not available when we wrote the “core” of the app. Due to these reasons we cannot expand the project in its current implementation. Building the new core will also allow us to add some long-awaited features, and the first step of the project will include:

New charts: of course this is what we all want. Backers will be able to choose three visual models that will be added to the current set.

Save and load configurations: it’s frustrating and time consuming to tweak all the parameters every time you want to make a new chart, in particular when you have to update it periodically and/or you have to produce a large number of them. In the new version it will be possible to save pre-set configurations (size, colors, fonts, etc) either by downloading a file that can be loaded in a latter moment or within your browser local-storage (a cookie). You will be able to decide if you want your data to stay attached to the configuration you download, resulting in a file that you can open and rework later on RAWGraphs.

More control and refinements: we always said that our goal is to make a tool to produce visualizations that can be further modified. We will continue to follow this philosophy, but there is still room to improve the basic layouts in order to be more refined, and add new parameters to customize the visualization directly in the app. We will also add the ability to export legends and to add annotations over the visualization.

Simplify the creation and the reuse of new visual models. Up to now, it was already possible to add new charts, but many users did for their own use and even if we received several code donations from users we were not able to add them to publicly available app for several reasons. In fact, proposed models were at times too specific, or they needed code revisions. In the new version, we want to make easier both the development of new visual models and, more relevant, the usage of them by the rest of the people.

Increased performance: of course more data, less lags, less crashes, resulting in a faster and more stable application for your everyday use.

The development of the new core will also allow us to improve a couple of things that we think are valuable:

Confidentiality of your data. The data will never be sent to other computers, it will be used locally on your computer. Open visualizations. We want to keep visualization open not only from the technological point of view but also from the practical one: we want to avoid intended or unintended lock-ins and produce artefacts that can be exported, modified and reused with any other software.

Well, here comes the magic! Again, we will have to thank and hug you all, but stronger <3

Only after that, we planned some stretch goals that we will cover according to the amount of funding we will collect.

Even more chart: More the funds, more the charts. How do we define which one? With a pool among backers, of course!

Stand-alone version: When you are dealing with really confidential data would be better to work completely offline. For this reason, we want to produce an offline stand-alone app that you can use without an internet connection.

Cross-browser compatibility: would be nice to use RAWGraphs also on Safari and Edge. We want to produce an app with the widest support among all browsers.

Export HTML bundles. SVGs are nice, but what about having the possibility to embed the code in a different web project? Our plans include allowing to download your visualizations as web packages (HTML + JS + CSS) that you can directly host on your website, and modify and customise it!

Interactive charts: When it is possible to export bundles, why not to add some interactivity? The new core will enable the creation and the export of interactive charts. Tooltips, filters, highlights... and many other ✨ details.

Export to online platform (e.g. Github pages, gist…): another step will be the ability to export directly on online repositories to make even more simple their embedding and sharing online.

Help us make it possible by spreading the word about the campaign through social media and within your network. Visit our pre-launch campaign page on Indiegogo and subscribe.